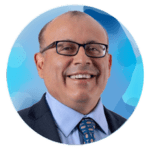 Dr. Arturo Molina, an oncologist, has led scientific innovation and driven clinical programs forward for over twenty years. With his extensive experience interacting with the FDA and other global regulatory bodies, he has led the development of hematological and oncologic clinical candidates from phase I through phase III and through post-marking trials. He joins Sutro from his former role as VP of oncology and scientific innovation at Johnson & Johnson’s California Innovation Center where he was involved in the evaluation of novel biologics and small molecules, with a focus on immuno-oncology. While working for Johnson & Johnson, Dr. Molina oversaw the approval of Zytiga® in a multitude of countries for metastatic castration resistant prostate cancer indications. Previously, Dr. Molina served as chief medical officer and executive vice-president of Cougar Biotechnology where his leadership efforts advanced the company’s abiraterone program, Zytiga®, from phase I into several global phase III studies. He played a substantial role in the diligence efforts which led to the near $1B acquisition of Cougar by Johnson & Johnson. Dr. Molina has also held leadership positions at Biogen Idec where he led the hematology/oncology clinical development team and oversaw the post-approval label expansion of Rituxan® in front-line follicular lymphoma and diffuse large B-cell lymphoma (DLBCL).  Dr. Molina was a faculty staff physician and adjunct professor in hematology/bone marrow transplantation and medical oncology/therapeutics research at the City of Hope Comprehensive Cancer Center.  Dr. Molina received his M.D. and M.S. degrees from Stanford University School of Medicine in Stanford, CA. He trained in internal medicine and medical oncology at Stanford University Medical Center and is board-certified in these specialties, He has an active California medical license and is a staff physician (volunteer) in the Oncology Clinic at the Veterans Affairs Palo Alto Health Care System. Dr. Molina is also an Adjunct Clinical Associate Professor (volunteer) in the Department of Medicine, Division of Oncology, Stanford University School of Medicine and is President-Elect of the Stanford Medical Alumni Association.  He has co-authored more than 120 publications in peer-reviewed journals, including the New England Journal of Medicine, Journal of Clinical Oncology, Blood, Lancet Oncology, Biology of Blood and Marrow Transplantation and Annals of Oncology.