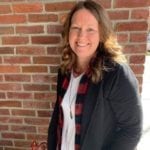 Aubrey Morgart is a wife, mother and breast cancer survivor. She is 37 years old and lives in a small town in Pennsylvania with her husband Chad and their nine-year-old daughter, Paige. She is a Store Manager for Aéropostale, enjoys spending time with family, and loves doing CrossFit; a strength and conditioning program. At the age of 31, Aubrey (Abby) was diagnosed with stage three breast cancer. She and her husband were married in a beautiful outdoor wedding and had just returned from their honeymoon when she discovered a lump in her left breast. It was determined that Abby had HER 2+ breast cancer, and her local doctor recommended she travel to UPMC Magee Women’s Hospital in Pittsburgh for treatment. In the spring of 2014, Abby’s oncologist informed her of a clinical trial that UPMC Magee was participating in. Abby jumped at the chance to be a part of it. She was chosen to receive the trial drug, which has now been FDA approved. From the time she was diagnosed she has inspired women of every age to be proactive with their self-exams, and has been very active in the breast cancer community. She has participated in fundraising events every year since her diagnosis, and in 2015 organized a fundraiser; “Clays for a Cause” that has donated over 10 thousand dollars to a local non-profit breast cancer organization. Abby’s fight with breast cancer may be over, but her fight for a cure won’t end until one is found.

• One in eight • Fight for life • Better than beforeRead more