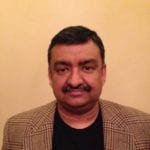 Suman K. Mukherjee is a Director in the Safety Assessment and Laboratory Animal Resources (SALAR) organization at Merck in West Point PA. Suman received his Ph.D. in Molecular Pharmacology and Toxicology from the School of Pharmacy at University of Southern California and then was a Post-doctoral Fellow in Hematology and Oncology at Children’s Hospital Los Angeles. After five years as a faculty member at the College of Pharmacy at South Dakota State University, he joined Merck in 2005. He has been the SALAR representative on a number of drug discovery and development teams and has contributed to several successful filings and registrations. Suman currently leads the Biochemical Toxicology and Toxicokinetics group that is responsible for generating, interpreting and reporting toxicokinetic data for parent molecules and metabolites in GLP and non-GLP toxicity studies with small and large molecules.