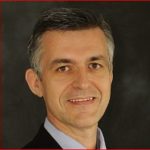 Dr. Lowinger joined Mersana in 2008, bringing nearly 15 years of global scientific leadership and drug discovery experience in the pharmaceutical and biotech industries. Over the course of his career at Bayer Pharmaceuticals in the US, Japan and Germany, he contributed to the discovery of more than 15 preclinical and clinical drug candidates in the areas of oncology, asthma, inflammation, virology, obesity and diabetes. Most notably, Dr. Lowinger is a co-inventor of the pioneering anti-angiogenic agent Nexavar (sorafenib), approved for the treatment of renal and hepatocellular cancer, as well as Stivarga (regorafenib), approved for the treatment of metastatic colorectal cancer. Dr. Lowinger has published more than 40 scientific papers and is a co-inventor on more than 40 patents. He has a B.Sc. (Hons.) in Chemistry and a Ph.D. in Organic Chemistry from the University of British Columbia and was a Merck Postdoctoral Fellow at the Ohio State University in the lab of Professor Leo A. Paquette. He currently serves on the Scientific Advisory Board of Keystone Symposia.